Judicial Independence : Keeping Law at a Distance from Politics 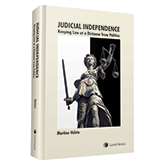 In recent years, much has been written about judicial activism. However, very little has been written about how the judicial system has transformed itself, and the increasingly greater role judges play in creating law. In this well-researched study, University of Montreal law professor Martine Valois offers a rare perspective on our legal system, examining how the judicial function has evolved as part of a larger historical and sociological process.

Originally written in French, and winner of the 2012 Walter Owen Book Prize (awarded by the Foundation for Legal Research), this text analyzes the changes to the judicial function over time, in light of historical alterations in the organization of political powers and the making of law. Readers will find, as former Supreme Court of Canada justice Michel Bastarache has stated, « This book informs, as no other, those who would question the legitimacy of judges in their new role as law-creators. »